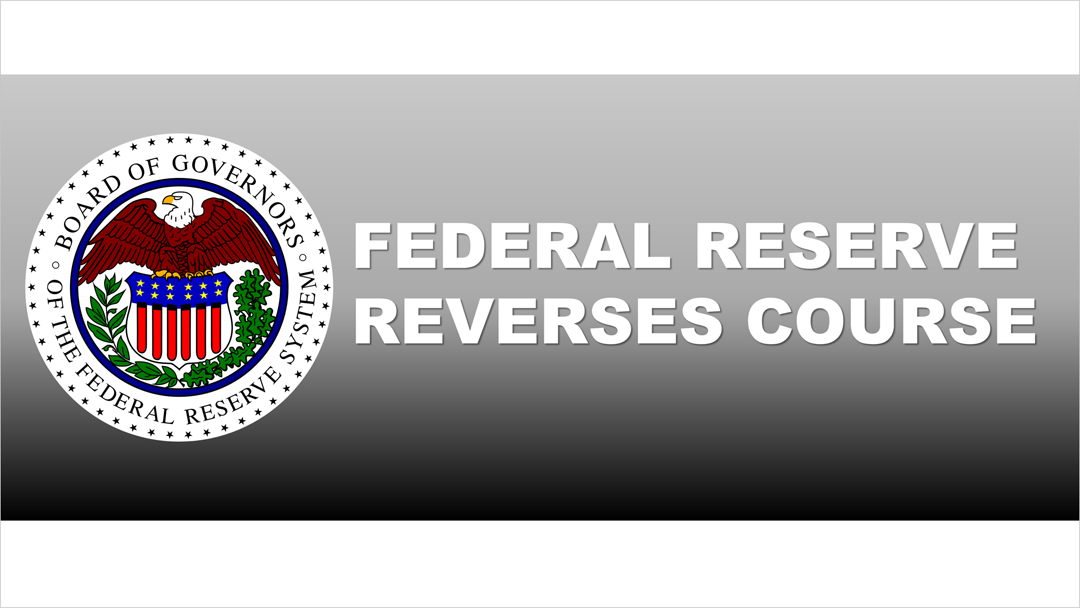 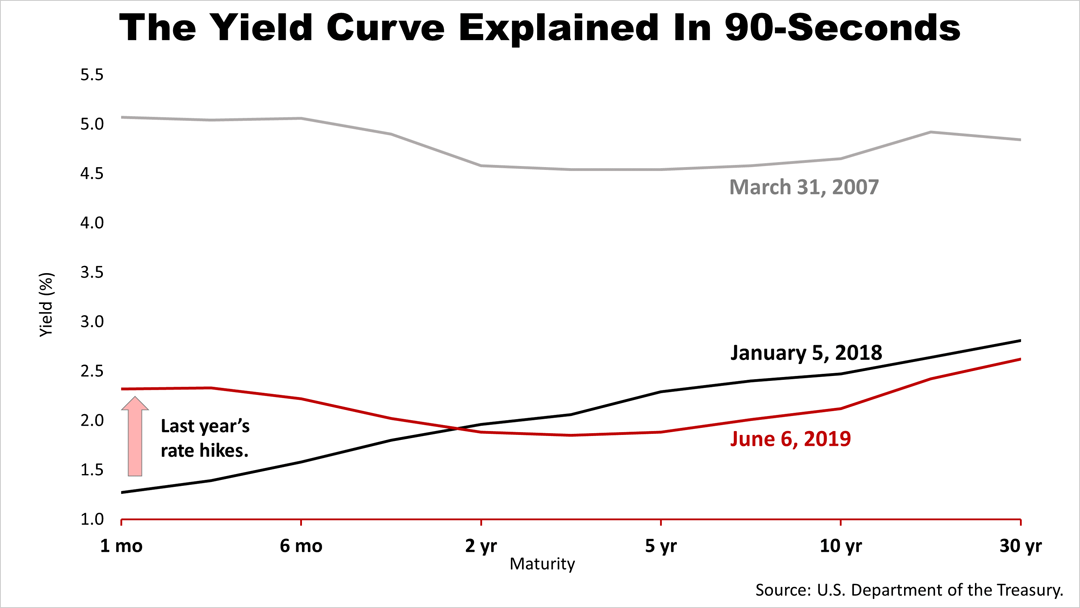 The yield curve inverted on May 14th, and inversion has preceded every recession since 1954, according to independent economist, Fritz Meyer.


The yield curve is the difference between the rate at which the Fed lends to banks and the rate on a 10-year U.S. Treasury bond. Since banks make money by borrowing from the Fed at the three-month T-Bill rate and lending it at a longer-term rate, the inversion destroys a bank's incentive to lend, and economic activity slows.


Just six months earlier, on January 5th, the yield curve was steep. The black line shows the three-month T-bill rate was 1.39% and the 10-year rate was 2.47%. A sharp rise in short-term rates concurrent with a decline in long-term rates has caused the inversion.


The last inversion of the yield curve (gray line) preceded the recession of 2007. 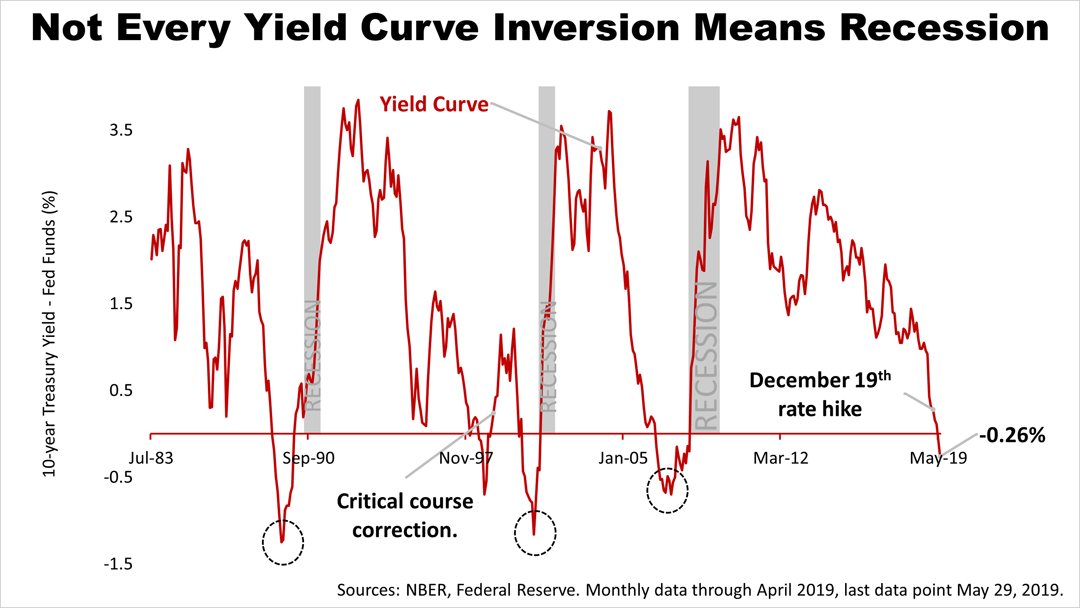 Not every inversion of the yield curve causes a recession. For example, the inversion in June 1998 was met by a critical course correction by the Fed and the expansion continued for nearly three more years. 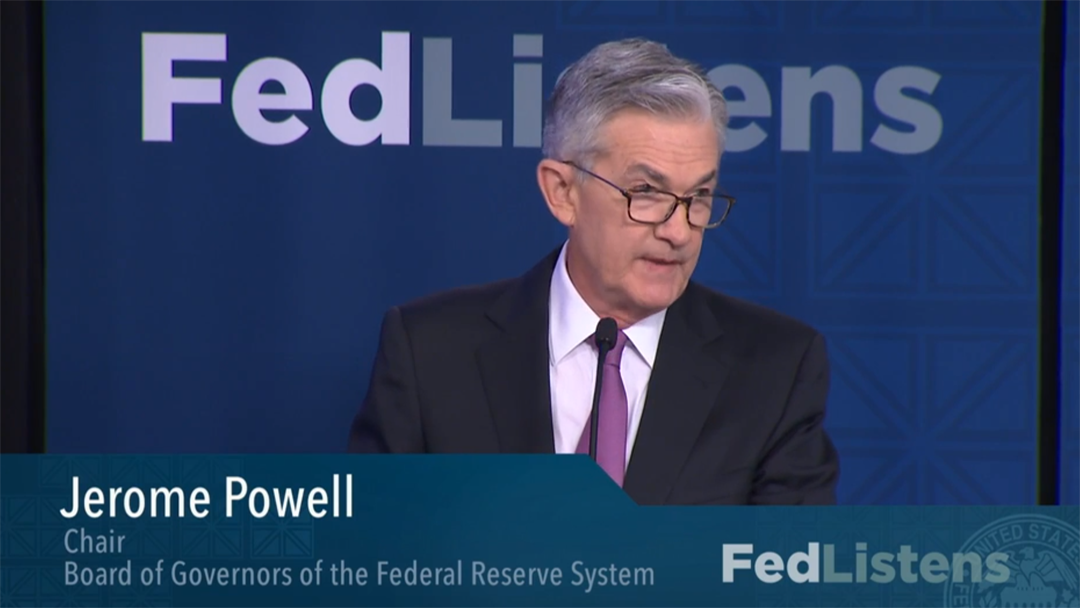 
Following the breakdown in U.S.-China trade talks and the announcement by President Trump of a threatened tariff on imports from Mexico, the Fed chair reassured markets.


"I'd like first to say a word about recent developments involving trade negotiations and other matters," said Mr. Powell, before delivering his planned speech on longer-term policy matters. "We do not know how or when these issues will be resolved. We are closely monitoring the implications of these developments for the U.S. economic outlook and, as always, we will act as appropriate to sustain the expansion, with a strong labor market and inflation near our symmetric 2% objective."

Barely a month has passed since the Fed said that it was holding rates where they stood and did not expect to ease.


"The Committee decided to maintain the target range for the federal funds rate at 2.25% to 2.5%," said Mr. Powell, in the bi-monthly Federal Open Market Committee statement. "The Committee continues to view sustained expansion of economic activity, strong labor market conditions, and inflation near the Committee's symmetric 2% objective as the most likely outcomes."

The abrupt reversal, of course was what the stock market wanted to hear.

The Atlanta Federal Reserve's real-time model for forecasting the current rate of growth of the economy plunged. From a 3.1% growth rate in the first quarter of 2019, the GDPNow forecast for the second-quarter on Friday stood at 1.5%. The economy is slowing. 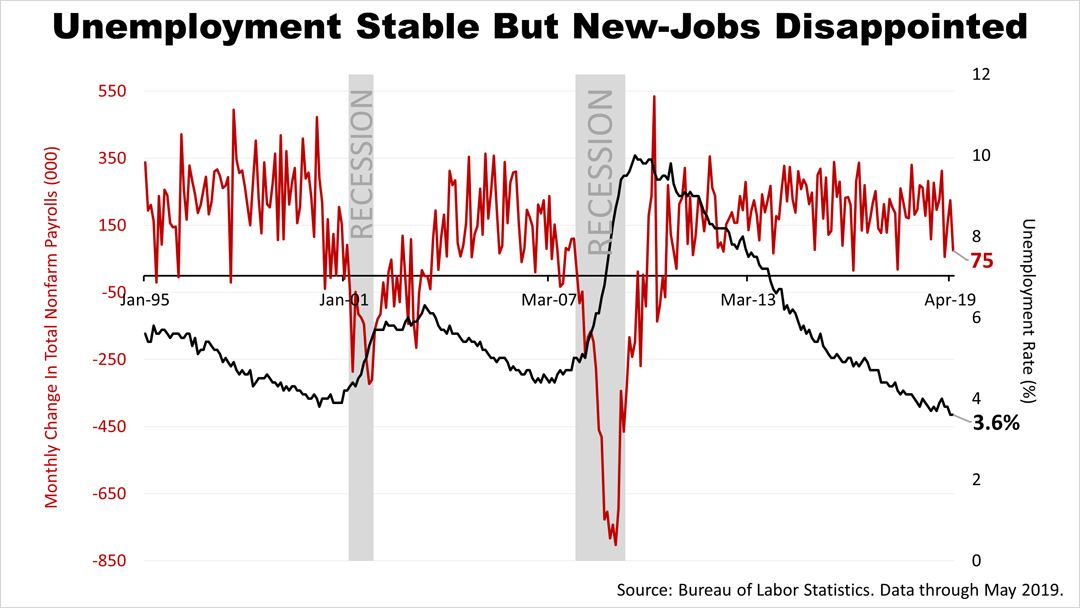 Also on Friday, the Labor Department said the economy added 75,000 net new jobs in May, which was much less than the 180,000 expected. It followed April's very strong 263,000 new jobs, which beat the 190,000 estimate. Job formation slumped dramatically preceding the last two recessions. Unemployment in May remained at a low last seen in December 1969. 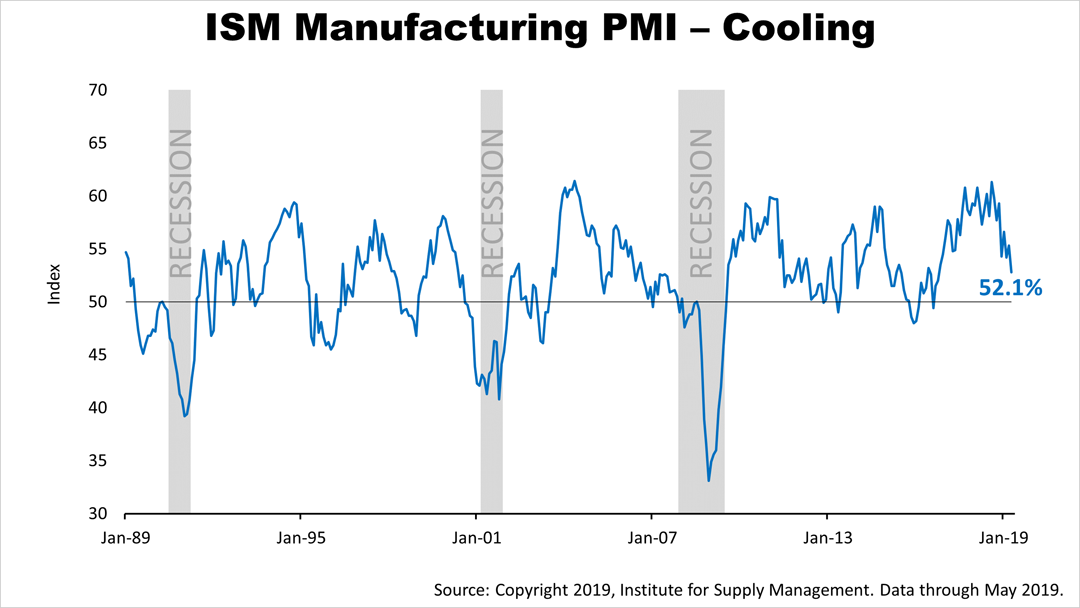 Meanwhile, manufacturers reported less activity. The Institute of Supply Managers index of purchasing activity at large manufacturing companies ticked down to 52.1 from April's 52.8. But May's new orders sub-index ticked up to 52.7 from April's 51.7, and manufacturing is historically a volatile business. 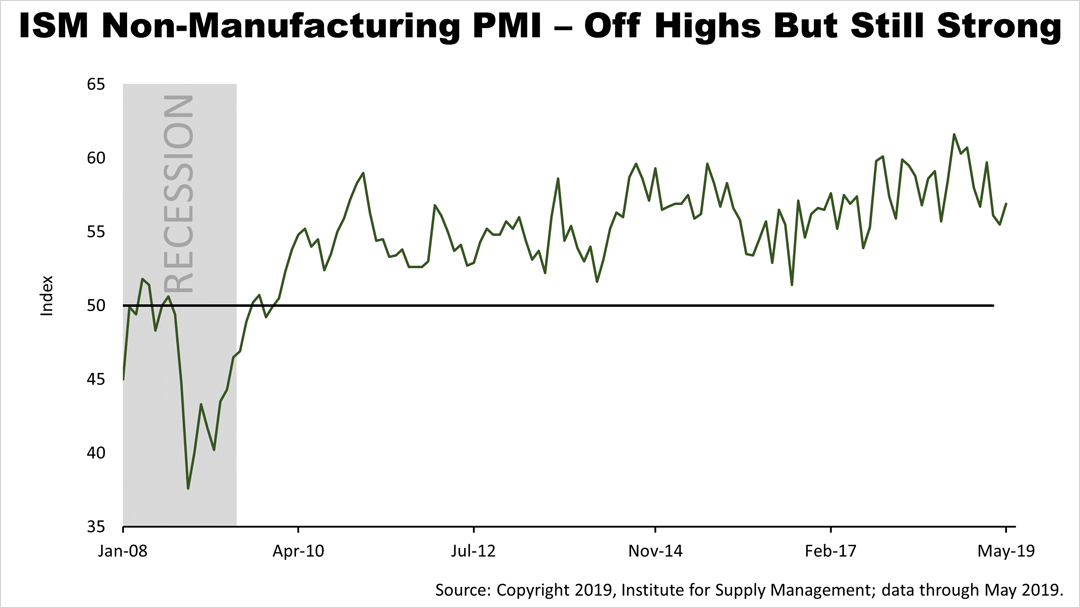 The much more important ISM index of purchasing activity at companies not in the manufacturing sector ticked up in May to 56.9 from April's 55.5, and May's new orders ticked up to 58.6 from April's 58.1. Since non-manufacturing accounts for about 88% of U.S. economic activity, that was good news. 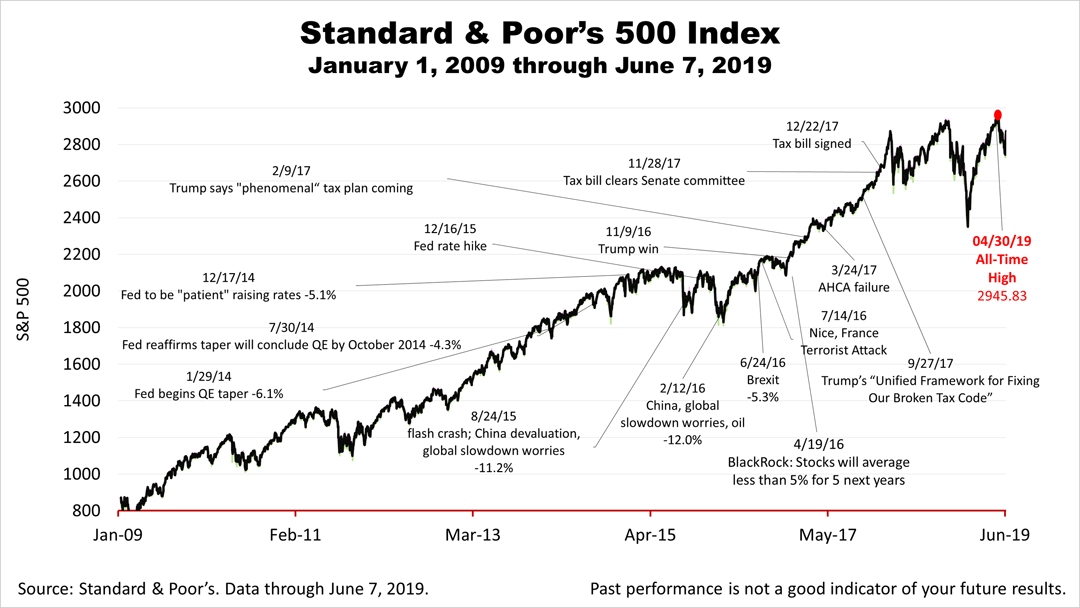 Despite the cloud of uncertainty created by the possibility of higher costs of imports from Mexico, the Standard & Poor's 500 index gained 1.1% for the week, regaining some footing lost last week. Stocks were just 3% off the all-time high of April 30th and closed the week at 2,873.34.

The economy has been expanding for 119 consecutive months and is within days of becoming the longest of expansion in modern U.S. history. Current fundamentals are strong, with the U.S. Leading Economic Indicators recently ticking higher, unemployment at a 50-year low, benign inflation and surging productivity. But uncertainty is also high and stock-price volatility should be expected.